Margaret High grew up in the newsroom of the Pulitzer Prize-winning News Reporter in Whiteville, North Carolina. She’s the fourth generation in a newspaper family. Her great-grandfather, grandfather and father have all had a hand in leading the paper that has served the 50,000 residents of rural Columbus county in eastern North Carolina since 1896. High, a UNC journalism student, is determined to carry on her family’s legacy through innovation and reinvention when she graduates this spring.

There’s something entrancing about watching a 1974 Goss Community Press in action. The oatmeal-colored newsprint leaps from one roller to the next, adding to its bouquet of colors on the page with each turn. Pressmen in their blue-on-blue, ink-stained uniforms dart from unit to unit, delicately turning knobs to control speed, ink and alignment. It takes multiple stages of imprinting before the final paper spills out of the press, perfectly stacked and proudly bearing The News Reporter’s name.

The printing press is both my childhood and the embodiment of my family history. I’m the fourth edition pouring out of the press, the fourth generation of a newspaper family. My great-grandfather, Leslie Thompson, was first and won a Pulitzer Prize for Public Service in 1953. His son-in-law, Jim High, now 85, was next and still has an office complete with his Underwood typewriter standing at the ready. The third is my father, Leslie High, the paper’s editor who started working at 13 years old as a photographer.

I never thought I would get swept up in the fast-moving press, but years of exposure led me to the family tradition. When I was about a foot shorter, I would sit on the chipped, ink-stained concrete floors watching the whisking rolls before running to the pre-print room. There I would proudly stand beside 30- to- 40-year employees as we worked in silence, manually inserting colorful advertising circulars from Food Lion, CVS and Belk. At the end of the day, my dad would walk into the back and take photographs with me in the middle, surrounded by my newspaper family and the number of inserts I had completed, scribbled with 6-year-old penmanship on a sheet of paper.

One of those photos is permanently taped in my dad’s office. 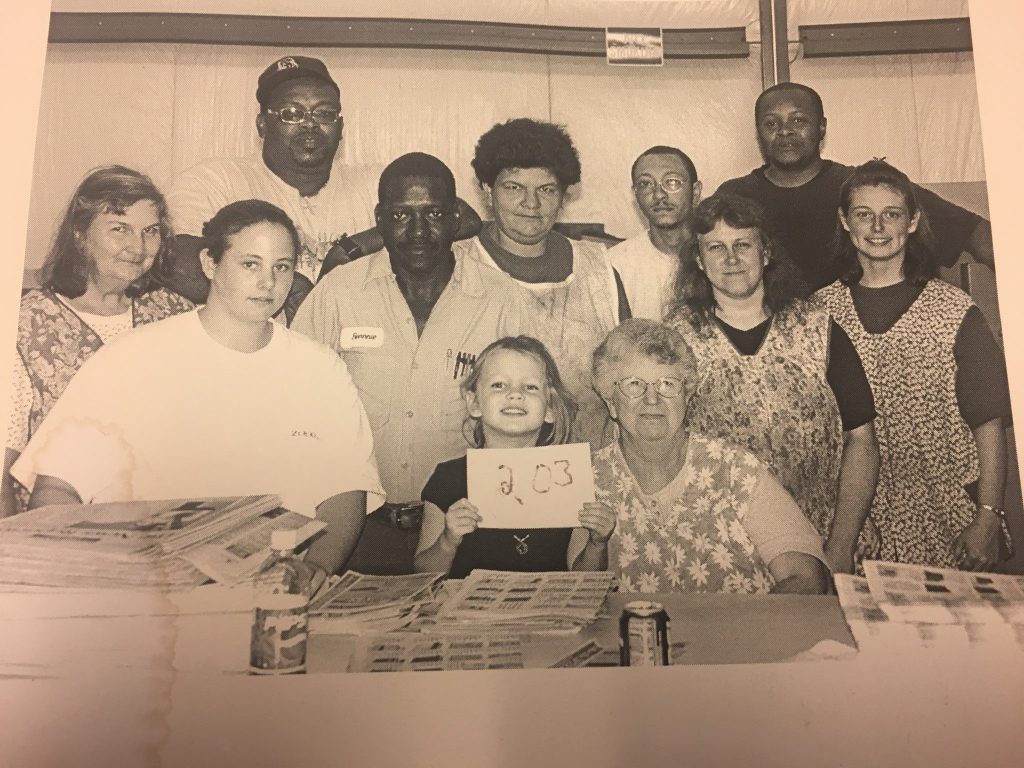 Margaret, center, surrounded by 30- to 40-year employees. Many are still working at The News Reporter today.

It hangs near a framed black-and-white photograph of my father as a child, holding a shovel he had used to break ground in 1966 for the new office on Columbus Street as my great-grandfather and grandfather stood next to him, watching with amusement.

The pride on my grandfather’s face in the picture is as distinct as the smell of newsprint in The News Reporter. He risked everything he owned to break ground on a new office and purchase a printing press in our small town. 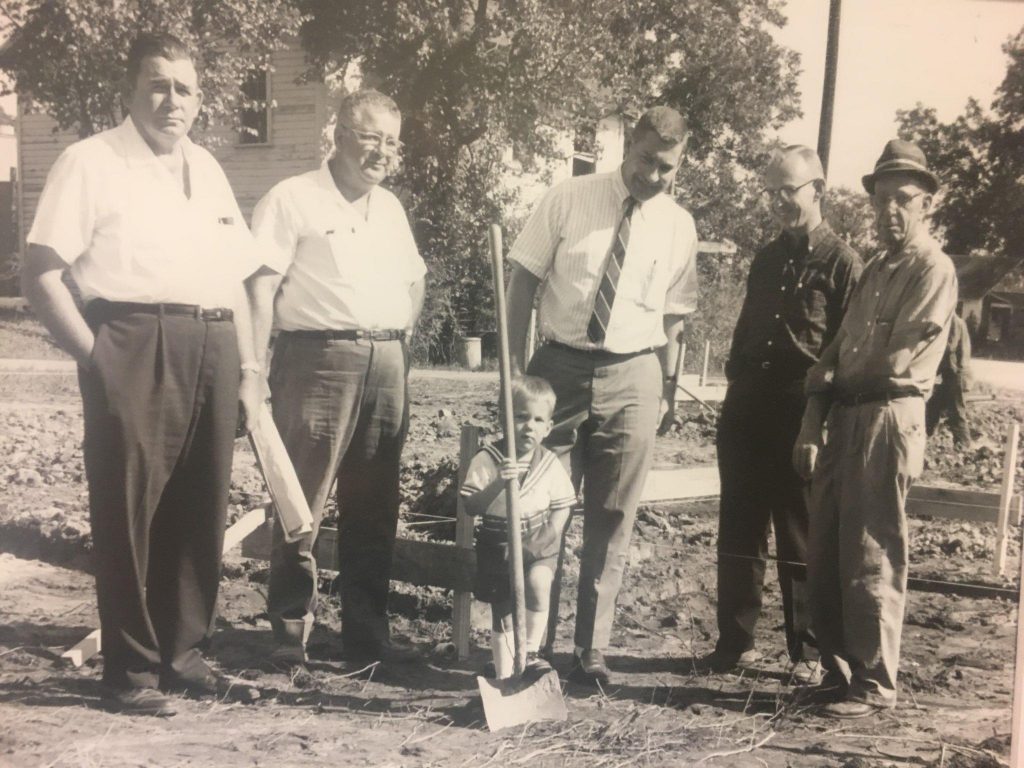 My father, Les High (center), breaks ground for The News Reporter where it currently resides on West Columbus Street. My grandfather, Jim High, watches directly behind my father.

My grandfather had seen firsthand how important good community journalism is. He knew and loved my late grandmother’s resolve to show no fear when the paper was under attack by Klansmen in the 1950s.

When Leslie Thompson decided to run reporter Willard Cole’s articles detailing Ku Klux Klan activity across Columbus County, he knew his family would be in danger. The Whiteville police chief was a Klansman. The police chief in another town in our county, Fair Bluff, was the Grand Dragon. The KKK was one of those small-town secrets, something Whiteville’s population of 4,500 kept under wraps. These men were cowards, though, thugs who threatened harm against anyone who opposed them while hidden behind a mask and robe.

Despite the threats of violence, the advertising boycotts and the subscription cancellations, my great-grandfather ran the damning stories anyway. The articles resulted in an FBI investigation and the subsequent arrest of many Klansmen. It was the apex of exceptional journalism: the truth at all costs. The Pulitzer committee agreed.

These stories filled my childhood but I never gave any weight to them. They were simply fun tales that I thought about while waxing newspaper copy and sticking the long tiles onto the layout sheets. Or little tidbits my dad would tell me when we developed film in the dark room. The ink slowly seeped into my veins over time.

My great-grandfather’s stubbornness has survived four generations, and as a proud descendant, I wanted to rebel. My classmates knew of my family and always told me I would be a journalist, too. Their cajoling drove me crazy; no one tells me what to do. Besides, my family survived the Great Recession, but I knew print was crumbling. We were in dangerous waters because of Whiteville’s aging population.

Print was dying and the legacy of my family with it. I planned on adapting by entering a different profession: maybe global studies or psychology? A liberal arts education was supposed to decide for me. The University of North Carolina did. It was journalism. With chagrin, I took introduction to news writing and fell in love. I was given the opportunity to write creative stories but used the truth instead of my imagination. Turns out the ink from the printing press actually stuck.

But newspapers didn’t magically stop disappearing, and news deserts didn’t stop their consuming creep across the nation. My father knows this, and so does the School of Media and Journalism at UNC. As I learned writing tools, three floors above me in in the journalism school sat my father and other members of The News Reporter staff: my mother, my aunt and a member from the advertising team. They took part in Knight-Lenfest conferences with UNC that took comprehensive approaches to saving journalism.

Despite a Pulitzer Prize and being a major employer in our community, The News Reporter hasn’t turned a profit in two years. It will lose money again this year. Our rural community is shrinking, life-long subscribers are dying, and young people aren’t filling the void.

But our four generations know how important a paper is for a rural community. Last year, we published an eight-part series investigating the opioid crisis in our county, which led to a better understanding and action against a plague that is killing both young and old. This fall, as Hurricane Florence flooded the swamplands and left a town in our county irreparable, our reporters posted urgent Facebook Live reports from the only place in the county that had power and the internet – the lobby of the local hospital.

With no electricity at The News Reporter for a week, my family drove through floodwaters to print the paper at The Fayetteville Observer an hour away. When the power finally came back on the night before the next press day, the staff cranked up the press at 12:45 in the morning, continuing a proud tradition of The News Reporter never missing an issue.

The stubborn gene in my father refuses to let our paper fail. Our community has benefitted from more than 120 years of The News Reporter. Journalism is the backbone of democracy, even in out-of-the-way places like Whiteville. The condition of the newspaper business dictates the conversations I have with my father. Every day we end up talking about strategies to diversify income, drive subscriptions and find ways to retain loyal, life-long employees.

Yet, alongside four generations of stubbornness are four generations of innovation. The fear is tinged with excitement. There’s a challenge we face in order to survive and the solution is unprecedented. I imagine that’s how my great-grandfather felt. The fear of printing a community-altering story tinged with excitement about shaking the fabric. Money didn’t matter when a great good was at stake.

Take away the office and chairs, the constantly ringing telephones and light hum of the press running. Take away the entire building. The News Reporter has pursued accountability and compelling storytelling for three generations. I intend to carry them for the fourth.

It’s an Invictus spirit that runs from Leslie Thompson to me. We’re rebellious, we’re independent, we’re unshaken. The future might not have the Goss Community Press. It might be a legal pad and internet access, but my family will continue our public service of truthtelling.

My family’s association with the press is immutable. It’s a lineage that runs like the whirling of print through the press and hits hard like the aluminum plates imprinting pictures, and it commands attention like bold headlines.

View all posts by: Alex Dixon