The advertiser-first mentality of 10/13 Communications has left its mark on the more than 40 papers the company owned for several years before selling them to four different owners in 2016. At the beginning of 2016, 10/13 was the 20th largest owner of newspapers, with 45 papers in Arizona and Texas. By year’s end, it had divested nearly all its holdings, retaining just three weeklies in the Tucson, Arizona, area under the subsidiary Tucson Local Media. The papers it sold included three dailies and 39 weeklies, located in and around Dallas, Houston and Phoenix.

The investment entity 10/13 Communications formed in 2009 as a partnership between 10K Investments and 13th Street Media, which is led by Randy Miller. In the industry, Miller is known as an advocate for his advertisers.  He believes in beefing up the sales staff, while keeping newsroom staffing lean. “Our customer is the advertiser. Readers are our customers’ customers,” a leaked 2007 13th Street Media guidebook read. “Sales calls are the primary contributing factor toward sales, so it is clear that the top priority at all of our newspapers is the sales department.” 1According to the guidebook, the company’s newsrooms “operate with a lean core of newsroom staff and contributors and wire services for efficiency.” In a 2015 media kit for advertisers, 10/13 sees its selling points as delivering “local news to targeted communities…we deliver the customers you want, where you want…we deliver results you need and return on investment.” 2

When 10/13 acquired several papers including Inside Tucson Business in 2014, editor Mark Evans resigned as employees were forced to reapply for a shrunken number of jobs. 3 “As spelled out in the manager’s guide, the customer was the advertiser, the news was just something to put around the ads,” he wrote in a column. “The company wasn’t selling an audience; it was selling to advertisers a cheap way to put their ads in front of middle-to-upper income suburban homes.” 4

Hearst Corporation, which has $10 billion in annual revenues, purchased more than half of the 10/13 portfolio, including 23 weeklies and one daily in the Houston suburbs. 5 At the Key Executives Mega-Conference in San Diego in early 2018, Mark Aldam, COO of Hearst and executive vice president of its newspaper division, discussed results at the Houston papers. 6

When the newspapers were purchased from 10/13 in 2016, he said, the chain was struggling with steep declines in print revenue and earnings. Even more worrisome, the papers had no significant digital revenue. At the one-year mark, the papers had experienced 17 percent growth in advertising revenue by “importing” the Hearst “go-to-market playbook” for the advertising staff. This increased ad revenue had generated funds that could be used to invest in local journalism, Aldam said.  The 10/13 papers became, in essence, zoned editions of the Houston Chronicle. By strategically linking the papers to the metro paper, Hearst was able to achieve “synergistic benefits” immediately and get a positive return on its investment in only a year’s time.

The other 10/13 papers in Texas – 14 weeklies in the Dallas suburbs – were sold to S.A.W. Advisors, whose president, Scott Wright, has extensive experience managing private equity-owned newspapers, including a position as publisher of American Community Newspapers.  In a statement at the time of purchase, he said that 10/13 did “an outstanding job” and that he would retain a similar strategy. “The goal is to provide hyper-local editorial content,” he said. 7 “Our primary focus will continue to be on local government, education and high school sports.  Most importantly, we will grow our digital endeavors at this company.” The four Phoenix-area 10/13 papers went to two separate local owners, Times Media Group 8and Independent Newsmedia. 9 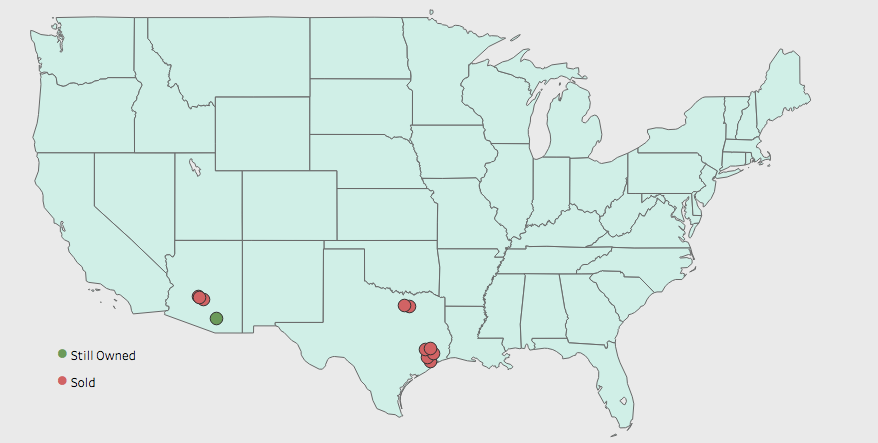 10/13 Communications has divested from all but three Arizona papers over the past four years.

The company’s remaining papers — the Explorer News, Marana News, and Tucson Weekly — represent what’s left of the 10/13 portfolio. The Explorer News and Tucson Weekly have a combined circulation of more than 75,000. 10 As of July 2018, Tucson Local Media operates with a staff of five journalists and 23 employees overall, including six advertising executives. 11 Because 10/13 is privately held, its financials on these newspapers are not publicly available.

Since the sale, 10/13 has made no statements or comments as to why it is retaining three papers in Arizona. As with its investment counterpart, Civitas Media, which exited the market except for one newspaper group in Pennsylvania, the company may own these papers for the foreseeable future, or it may be prepping them for another sale.

Research Assistant Alex Dixon compiled data and did much of the analysis in this report. He is a researcher in the Center for Innovation and Sustainability in Local Media in the School of Media and Journalism at the University of North Carolina at Chapel Hill.