That experience as a “paper boy” sparked a lifelong passion and appreciation for the newspaper industry.  Buffett served more than two decades as a member of the Washington Post board of directors, famously advising Katharine Graham, and in 1977 made his first newspaper purchase, The Buffalo News. 2 So, when Media General decided to sell its newspaper empire in 2012 and focus solely on its broadcasting properties, Buffett was an eager bidder.

Despite the business challenges confronting local newspapers, he told Berkshire Hathaway shareholders that the price was right, given the depressed valuations of newspapers, selling for three to five times earnings.  “(Vice chairman) Charlie (Munger) and I believe that papers delivering comprehensible and reliable information to tightly bound communities and having a sensible Internet strategy will remain viable for a long time,” he wrote in the 2012 letter to his shareholders. 3 One month after canceling the annual newspaper toss, the famed “Oracle of Omaha” admitted that Berkshire Hathaway had failed to “crack the code” on newspaper ownership. 4 He formally turned over day-to-day management of his six-year-old newspaper empire, BH Media, to Lee Enterprises, a 128-year-old newspaper chain with more than a hundred papers in the Midwest. 5

At its peak, the revenue from BH Media’s 75 newspapers represented less than one percent of the total $242 billion in revenue 6in the Berkshire Hathaway portfolio, which includes insurance companies, railroads and financial services. In 2013, Buffett said he was targeting an after tax-return of 10 percent for the newspapers, which he believed would be achievable without significant cost cutting. That year, company executives reported that the newspaper unit was profitable and debt free, except for a legacy mortgage on an Omaha newspaper building. 7 However, as print advertising and circulation declined – and the BH Media newspapers failed to significantly increase digital revenue – the print publications increasingly relied on a variety of cost-cutting measures to achieve the targeted return. In a 2017 memo, then BH Media president and CEO Terry Kroeger said that “without cost reductions, some BH Media operations would not be profitable.”8

The company resorted to hiring and wage freezes, as well as targeted layoffs and buyouts, as the employee count dropped from 4,074 9 in 2013 to 3,719 by 2017. 10 In a press release announcing that Berkshire Hathaway was bowing out of the newspaper business and handing over day-to-day management of its empire to Lee, Buffett praised Lee’s financial performance.  11

Although its revenues have declined in recent years, Lee has maintained one of the highest operating margins in the industry. In 2017, Lee had an operating income of $92.5 million and a margin of 16 percent. 12 Roughly 20 percent of Lee’s $566.9 million revenue came from digital initiatives. “It is very difficult to see . . . . how the print product survives over time,” Buffett said during a question-and-answer session at Berkshire Hathaway’s 2018 annual meeting, acknowledging that his 2012 assessment of the long-term viability of print newspapers had missed the mark. 13

Like BH Media, Lee also operates newspapers in small to midsized markets, ranging from Billings, Montana, to St. Louis, Missouri, and Tucson, Arizona. The BH Media newspapers are located in 11 states, mostly in the South and Midwest and serve small markets such as Dothan, Alabama, and Hickory, North Carolina, as well as mid-sized cities such as Richmond, Virginia, and Omaha, Nebraska.  The average circulation of its 33 dailies is 27,500, and its weeklies have an average circulation of 7,300.

The two companies both own papers in Iowa, Nebraska, New York and South Carolina, although Lee says the only overlapping news coverage is between the Omaha World-Herald and Lincoln Journal Star in Nebraska. 14 In recent years, Lee has merged papers in regional proximity to reduce expenses. For example, in 2008, the company merged the daily 5,000-circulation South Idaho Press and several weeklies into the Twin Falls, Idaho Times-News. 15 The company has also bought papers, such as The Dispatch Argus in Moline, Illinois, in 2017, to strengthen its foothold in a region. 16 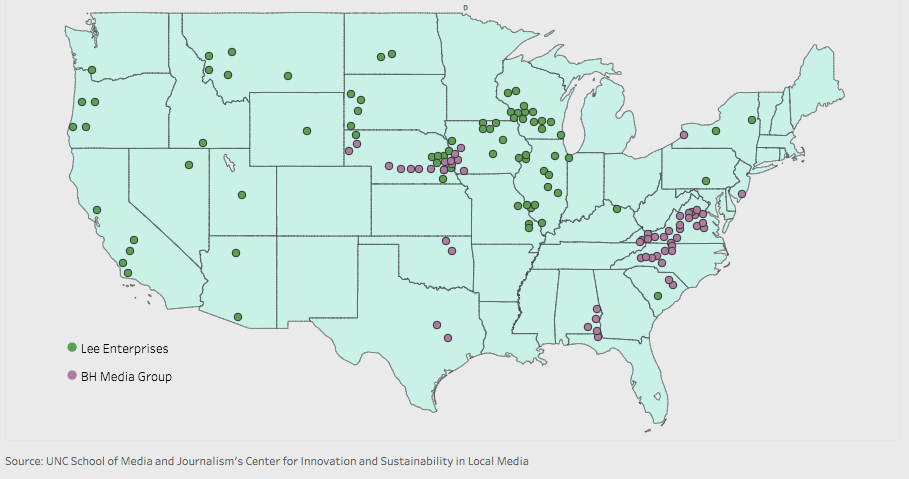 Lee Enterprises and BH Media own 175 papers in 29 states.

Berkshire Hathaway has placed some restrictions on Lee’s management of its papers. For example, Lee cannot outsource printing or change publication days without BH Media approval. However, for the most part, Lee is free to manage BH newspapers as if they were owned by Lee.  It can reduce staff to “be consistent” with its own standards without permission from BH Media. 17

Between 2014 and 2017, Lee company decreased its compensation expenses by 8.4 percent, or $19 million, by cutting 9 percent of its workforce, from 4,500 18 to 3,626. 19 If Lee can’t boost BH Media’s revenues, it has strong incentive to cut costs. According to the management contract, Lee receives an annual fixed fee of $5 million, plus one-third of profits over $34 million in the first two years, and one-half of those profits in the final three years.20

Some in the industry saw an irony in Buffett’s willingness to hand over management of his papers to Lee. In 2012, when Lee filed for bankruptcy protection, Buffett purchased some of the outstanding loans, which converted to preferred stock, thereby putting Berkshire Hathaway ahead of other creditors if Lee ultimately failed. 21 However, Buffett increased Berkshire’s stake in the company once it emerged from bankruptcy by refinancing $94 million of Lee’s long-term debt. 22 Lee paid off its debt to Berkshire Hathaway 23 two years early in 2015, freeing up the company’s cash flows, and, undoubtedly impressing Buffett.

In 2017, Lee’s long-term debt was down to $496.4 million, 24 a decrease of almost 50 percent since it declared bankruptcy. 25 “(This agreement with Berkshire Hathaway) enables us to generate more cash flow, speed our debt reduction, enhance our industry leadership and further advance our abilities as we introduce our digital and print strategies at BH Media properties,” Lee executive chairman Mary Junck said in a statement about the agreement.

In interviews and talks, Buffett often acknowledges that newspapers’ “significance to society is enormous.” 26 Although he failed to “crack the code” on a new business model for newspapers, Buffett is now betting that a hundred-year-old newspaper company can. “The publishing business is in transition, to be sure, but we remain positive about our future,” said Junck. “Many print opportunities remain, and digital audiences and revenue continue to grow and flourish.” 27