Despite having a portfolio of nearly a hundred newspapers just four years ago, Civitas Media has bought and flipped its way to a near exit from the industry. Nearly six years after it formed, the company has sold or closed all of its newspapers except for four – the Times-Leader in Wilkes-Barre, Pennsylvania, and its affiliated weeklies. 1

The Civitas chain of papers was created in 2012 through a merger of four bankrupt or financially distressed media companies bought by private equity firm Versa Capital Management. 2 Those four media companies were Freedom Central, Heartland Publications, Impressions Media and Ohio Community Media. At its peak, Civitas owned 98 papers in 12 states in the South and Midwest. Sixty percent of the papers in the Civitas chain were in counties with higher than average poverty rates.  Its entire portfolio of small-market newspapers had an average circulation of under 10,000.

Versa’s focus is on purchasing distressed properties, streamlining operations and then selling the assets.  “We buy the whole company and fix it and then sell it,” Versa founder and CEO Gregory Segall said in a 2016 interview with Bloomberg News. 3 “We are buying companies that are experiencing some kind of transition, maybe it was an operating problem. Maybe it was a strategy problem, an industry problem [or] a raw materials, supply problem.”  The Versa formula for “fixing” its newspapers involved dramatic cost cuts and regional consolidation, as well as short-term revenue tactics, such as increasing print circulation and advertising rates instead of investing in digital transformation. 4 As a result, employees often complained that Civitas stripped newsrooms, as well as advertising and circulation departments, of resources in order to turn a profit. “During our transition with Civitas, our newspapers have lost the hometown dedication along with customer support due to pricing of subscriptions and retail advertising,” a business development representative at the Troy Daily News in Ohio wrote on a job review website. 5

The investment company also resorted to closures if papers didn’t meet targets. In 2013, Civitas closed eight suburban weekly newspapers around Raleigh, North Carolina, and Dayton, Ohio. 6 “Our core business is focused on developing community news and information portals, in areas that are predominately rural and would not be served well otherwise,” then Civitas CEO Michael Bush said in a statement about the closures. 7 However, in late 2015, Civitas closed the 128-year-old, 2,500 circulation, Chronicle, 8 which served residents of the rural South Carolina community of Cheraw. 9

Civitas sold almost all of its papers in 2016 and 2017 to AIM Media (36), Champion Media (22), Boone Newspapers (4), and Hearst (3), all of which are privately owned and operated newspaper chains. Civitas first sold the Mount Airy (North Carolina) News – along with more than 20 other papers in North Carolina and South Carolina– to Champion Media, started by the former chief operating officer of Civitas. 10 Less than four months later, Champion resold the Mount Airy group of eight papers to Adams Publishing Group. 11

“I think it’s safe to say our previous ownership was an investment group, whose primary function was to maximize short-term profits while setting up the sale of its assets, without too much regard for what happens two or three or five years down the road,” editor John Peters wrote in his column. 12 While nearly three-quarters of the Civitas papers acquired by the AIM, Adams and Boone companies are located in impoverished counties, the new owners have stated their commitment to investing in both the papers and the communities where the papers are located. 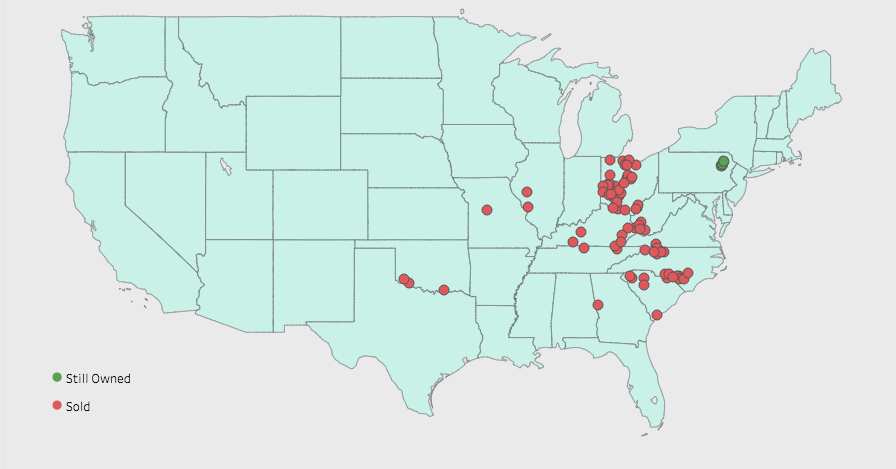 Civitas Media has divested from all but four Pennsylvania papers over the last four years.

Versa retains ownership of only one regional newspaper group in Pennsylvania. The rationale for retaining the Wilkes-Barre Times-Leader group is unclear since as its finances are not publicly available. Compared to the majority of papers formerly in the Civitas portfolio, the Wilkes-Barre newspaper group is located in a county with a sizeable population of more than 300,000 people. Since 2014, the Times-Leader’s circulation has fallen from 40,000 to nearly 24,000, a 40 percent decline that exceeds the national average. Versa says it is investing in the paper’s future, setting aside $1 million to improve the printing press, upgrade the production facility and hire additional staff in editorial, ad sales and circulation. 13 “Versa would not have approved a $1 million investment in upgrading the press and infrastructure, improving our website and hiring additional personnel in our ad sales, circulation and editorial teams (if it wasn’t committed),” said Lior Yahalomi, Civitas Media’s CEO, in the Times-Leader editorial. “The Times-Leader Media Group is a profitable business, and we are going to continue improving our content and service for our customers.”  However, since announcing the $1 million investment, Versa has moved the Times-Leader to a smaller office building and laid off employees from several departments. 14

Reflecting on the sale of the Mount Airy News to Adams Publishing, editor John Peters concluded, “The business world is made up primarily of two camps. The first places an emphasis on short-term maximum profitability on assets it can then sell, with little regard for long-term sustained growth. The second takes that longer-term approach, building relationships and quality, emphasizing sustainable profits, growth and customer satisfaction.” 15