In the late 1990s, the portfolio managers of the Retirement Systems of Alabama (RSA) identified what they believed would be a worthwhile investment – regional broadcast stations and local newspapers in small and mid-sized markets, primarily in the South and Midwest.  Instead of buying a minority stake in these companies, the Alabama state pension fund, known for its unorthodox investments in golf courses as well as a Manhattan skyscraper, 1 decided to spend billions snapping up these newspapers and broadcast stations outright and then managing them on a day-to-day basis. 2

RSA became one of the first investment funds to spot the earnings potential of newspapers and broadcasting operations in non-competitive markets, which often had operating margins of 20 to 50 percent in the pre-digital era.  By 2004, its subsidiary, Community Newspaper Holdings Inc. (CNHI), was the fourth largest newspaper chain in the country, in terms of number of papers. It owned 149 papers, including 86 dailies, with an average circulation of less than 10,000.

However, the digital revolution and the 2008 recession changed the math for RSA, as margins – in even non-competitive markets – declined to single digits.  The pension fund responded by expecting financial efficiency from all its newspapers, selling or closing those that were losing money, and, in the process, reducing the number of papers in its portfolio to 114. “We tried every way we could to keep the paper going, including talking to potential buyers,” Steve McPhaul, CNHI executive vice president and chief operating officer, said of the 2014 closure of the Tarboro Daily Southerner in North Carolina, which, in its final days, had a circulation of less than 3,000. 3

In late 2017, as the print revenue decline continued unabated, RSA decided to merge CNHI with Raycom Media, its broadcasting subsidiary, in an effort to further reduce costs, encourage digital collaboration between the two media groups, and decrease CNHI’s reliance on print revenue. 4 “As always, we will continue to demand the best execution from all RSA counterparts, and will strive to produce results that strengthen the Retirement Systems of Alabama and its beneficiaries,” the fund said in its 2017 annual report. 5 However, in June 2018, after only nine months, the marriage was dissolved. RSA announced that Gray Television had purchased Raycom for $3.6 billion. CNHI would be spun off 6 and its 114 newspapers – 73 dailies and 41 weeklies – sold. 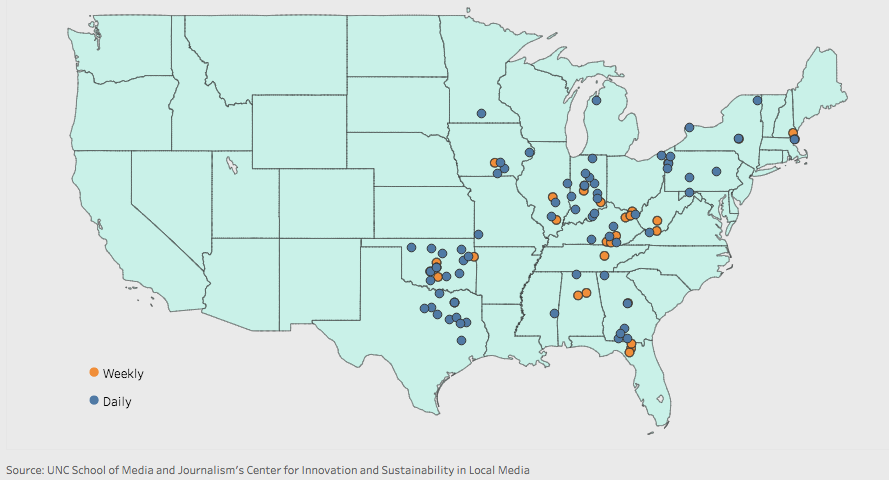 The breakup comes at a tenuous time for CNHI. Its newspapers are circulated in 21 states; the dailies have an average circulation of 9,700, its weeklies, an average of 7,300 circulation. In the counties where CNHI owns newspapers, the average poverty rate is just over 17 percent—compared with the national average of less than 13 percent. 7Even as it sold and shuttered papers, the company also made efforts to boost its journalism, designating a journalist in each state where it owned papers to cover statehouse news and produce regional enterprise stories. 8

To compensate for the added costs, the company cut back on staffing at individual papers and required remaining employees to take “furlough days” (days off without pay). 9 In an April 2018 interview with CNN on the company’s plan for responding to increased tariffs on Canadian newsprint, CNHI president and CEO Donna Barrett said cutting staff isn’t a “realistic option. . . We are already down to bare bones.”  Instead, she indicated the company would look at further reducing the number of pages in their newspapers or cutting print editions. 10 Simultaneously, as profit margins decreased at CNHI, RSA has faced pressure to increase the return on its portfolio of investments. In 2001, the state pension plan was fully funded and had sufficient money to pay all its obligations.  However, since then, investments made by RSA have repeatedly fallen short of expectations. 11 As a result, in 2015, Alabama faced $13 billion in state pension debts and another $11 billion in unfunded liabilities for retiree health insurance.  This prompted an investigation by a government subcommittee. Over the past several years, the two boards that manage RSA have made efforts to curb the power of CEO David Bronner and expand oversight of the fund’s investments. "We turned it from operating like a benevolent dictatorship to a democracy," then ERS (Employee Retirement Systems) board member James Rowell said in a 2015 interview. 12

RSA does not break out financial results for Raycom and CNHI, so it is not possible to track their year-over-year returns since 1997.  CEO Bronner justified the acquisitions in the 1997 newsletter by saying, “The State of Alabama will receive approximately $26 million in advertising through Raycom Media and CNHI to promote various Alabama attractions from the Robert Trent Jones Golf Trail to the Space Camp.” 17In a December 2015 RSA newsletter, Bronner said the Raycom broadcasting division had a 16.4 percent annual rate of return. The return on the pension fund’s entire portfolio that year was just over one percent. 18 In 2017, RSA’s entire investment portfolio had a rate of return of more than 12 percent. But the pension fund still faces a shortfall. As of 2017, RSA’s net pension liability, or the difference between its obligations and assets, totaled nearly $10 billion. 19

In recent years, even as the newspapers struggled under worsening financial restraints, both the CNHI and Raycom divisions were reportedly covering the costs of the pension fund’s corporate jets and pilots. 20 As a result, employee morale has suffered, as indicated by postings on recruiting and social media sites. “You could also provide the newsroom with enough staff to improve the quality and content of our products instead of adding more workload to the few employees that are left and not compensating them for the additional work required of them,” a CNHI advertising employee said in an online job review. “If the only focus remains on the profit in your pocket and not on quality and content, you will continue to lose readership and advertisers.” 21

After the sale of Raycom to Gray, Bronner said in an RSA newsletter than the pension fund would have an 11 percent stake in the combined broadcast company with nearly $800 million invested into preferred and common stock. However, it would be ceding day-to-day management to Gray. Raycom will continue operating its headquarters in Montgomery, Alabama. 22

In contrast to other investment funds, which aggressively manage their portfolio of assets, quickly selling or closing underperforming newspapers, RSA has pursued a different strategy.  Instead of buying and flipping, the Alabama pension fund aimed to buy and hold its small papers, assuming they would generate steady and reliable returns for their retiree shareholders. But the digital revolution and the 2008 recession interceded, dramatically depressing margins.  Like the readers and advertisers who abandoned the CNHI papers in recent years, RSA has decided to shed its newspaper habit. Once the CNHI newspapers are either sold – or closed if a buyer cannot be found – RSA will effectively conclude 20 years of media stewardship.