The ruckus started when one hedge fund accused another hedge fund of mismanagement.  In March 2018, Solus Alternative Asset Management, which had a minority share in another hedge fund, Alden Global Capital, filed a lawsuit in Delaware, accusing the very secretive Alden fund of siphoning profits from its Digital First newspaper chain to prop up its failed investments in Greek debt and a Canadian pharmacy chain. 1

As word of the lawsuit leaked, journalists managed to obtain a copy of the 2017 financial results for Digital First and publish it. 2 At a time when other major newspaper chains were struggling to maintain single-digit operating margins, executives at Digital First had posted an operating margin of 17 percent, apparently by cutting newsroom staffing by as much as twice the industry average. In response, journalists at Digital First papers revolted by publishing stories and editorials that criticized Alden for its management of Digital First. With advance notice that yet another round of layoffs was imminent, news executives at the 190,000-circulation 3 Denver Post decided to print a rare front-page editorial on April 8 with the headline, “News Matters: Colo. should demand the newspaper it deserves.”  The following day Digital First laid off one-third of the Post’s remaining newsroom staff of 100. This left the Denver Post, which had 184 journalists in 2012 when it produced the articles that won a Pulitzer Prize for coverage of the Aurora theater shooting, with only 66 journalists covering a metro area of more than 2 million people. 4

The Denver revolt, which quickly spread to other Digital First newspapers across the country, was covered by news outlets around the world, including The New York Times and Asahi Shimbun in Japan. In May, Digital First employees protested outside the New York office of Alden and attempted to deliver a petition, with 11,000 signatures, demanding that Alden either invest in its Digital First papers or sell them to someone who would. Alden and Digital First management responded by holding firm.  The company fired one journalist and threatened to fire others who wrote critical articles. 5 A handful of journalists left in protest.  However, Digital First left the mass layoffs in place and quietly filled the vacancies left by the protestors with out-of-state journalists or those hired from digital news sites.

“For a few weeks in the spring and early summer, national attention focused on Denver, Boulder, the Digital First Media chain, and then more broadly on the effects of late capitalism on local American newspapers writ large,” wrote Corey Hutchins, a reporter for the Columbia Journalism Review, who also produces a monthly newsletter.  “August came with a calm. Things got quiet. A revolution was not realized.” 6

Digital First was formed seven years ago as a subsidiary of Alden Capital when the hedge fund plucked two of the largest newspaper chains in the country out of bankruptcy. Those two chains, MediaNews Group and Journal Register Co., formally merged in 2013 under the Digital First banner. The company name was intended to signify a corporate commitment to transitioning from print to digital. “Project Thunderdome,” launched in 2012, provided national and international articles to Digital First newsrooms throughout the country through a centralized hub. But when digital revenues failed to materialize, Digital First abandoned the project in 2014, laying off more than 50 journalists. 7

Shortly after, Alden announced that Digital First was for sale. Although the private equity firm Apollo Global Management expressed interest in purchasing it, Digital First couldn’t persuade Apollo to meet its price. Then-CEO John Paton said Alden had concluded the Digital First chain would not be sold to a single buyer. “There’ll be a horse-trading of assets,” Paton said in a 2015 interview, adding that the industry should expect Digital First to be both a buyer and seller going forward. 8 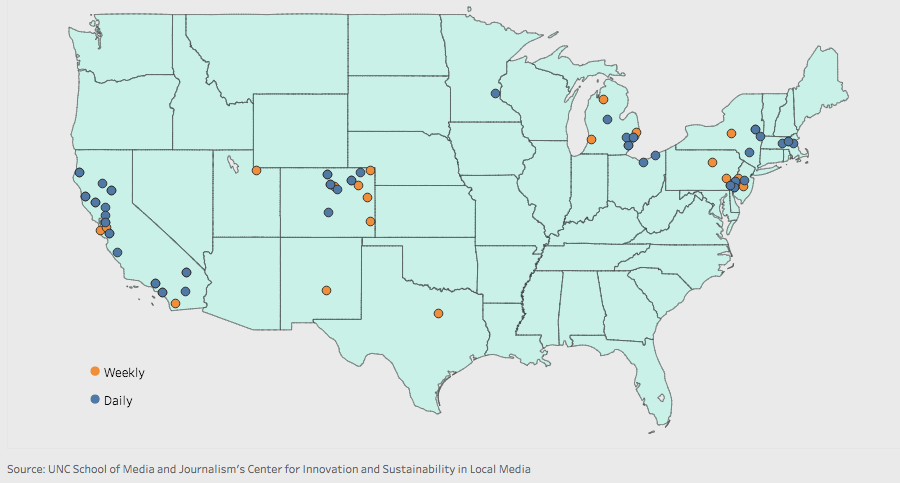 In 2014, Digital First owned 208 newspapers and controlled nearly 4.6 million in circulation. Through a combination of merging and selling, the company now owns 158 papers and controls nearly 3.2 million in circulation. In 2016, the company purchased the Orange County Register and Riverside Press-Enterprise in bankruptcy proceedings from Freedom Communications. 9 Both papers have gone through multiple rounds of layoffs and employee buyouts. 10 In March 2018, Digital First outbid GateHouse Media for control of the bankrupt 85,000-circulation 11 Boston Herald. Of the 240 people employed by the paper in December 2017, only 175 reportedly received job offers from Digital First. 12 Simultaneously, Digital First has been shedding papers. In 2016, Digital First sold several community newspaper groups in Alaska, 13 Utah 14 and the Northeast 15 to local owners. In 2017, the company sold three Connecticut dailies and eight weeklies to Hearst. 16 The company has focused on regional consolidation within the markets where its other papers are located, such as combining eight San Francisco Bay-area newspapers into two titles in 2016 and laying off 20 percent of staff. 17 Most of the Digital First papers are located in California (76), followed by Pennsylvania (29) and Colorado (16).

According to the leaked financial statements, Digital First newspapers brought in $939 million in revenue in 2017 and had an operating income of $159 million. 18 This compares to GateHouse, the largest newspaper chain in the country, which had $1.3 billion in revenues in 2017 and an operating income of only $34.6 million. 19 Other large chains, including Gannett, 20 and tronc/Tribune, 21 also posted single digit margins in 2017. The higher margins posted by Digital First were the result of aggressive cost reductions at the newspapers, including multiple rounds of layoffs, and a lack of investment in both tangible assets, such as property and equipment, and intangible ones, such as wage increases to attract and retain talent.  Reporters in two Philadelphia suburban newsrooms must work remotely because the Pottstown Mercury’s mold-infested newspaper building has been condemned.22

According to a poll of NewsGuild representatives at 12 Digital First papers, 23 staffing dropped 52 percent from 1,766 to 849 between 2012 and 2017. By comparison, between 2012 and 2016, the Bureau of Labor Statistics estimates that total newspaper employment dropped by slightly more than a quarter overall. 24

The remaining staffers have been expected to work long hours without significant wage increases.  “What sets (Alden president Heath) Freeman apart is that he seems to have a rather unique view of a newspaper’s purpose,” Bloomberg columnist Joe Nocera wrote in an editorial. “In this view, his papers are intended not so much to inform the public or hold officialdom to account, but to supply cash to use elsewhere. His layoffs aren’t just painful. They are savage.” 25

As for the current financial sustainability of Digital First’s strategy, the company has a $225 million loan that comes due in 2018, according to the Solus lawsuit. In a transcript of a June 2018 meeting between company executives and employees at the Denver Post, Digital First chairman Joe Fuchs said the company has explored refinancing, but “the bond market has moved away from us. . . . The balance sheet of (Digital First) is as strong as you could possibly want it to be. . . . There’s zero, zero financial vulnerability.”26

The unrest across its newsrooms has prompted journalists and concerned community members to explore buying Digital First papers in several communities. This includes a Colorado civic group that has raised $10 million from local and statewide investors in an attempt to buy back the Denver Post, as well as similar efforts by editors and union representatives in California and the Philadelphia suburbs. 27 Digital First will reportedly entertain any offer at a minimum of 4 times earnings. 28 However, based on the recent experience of local investors who have purchased Digital First papers, these new owners may struggle to return these gutted and demoralized newsrooms to their former glory. When billionaire John Huntsman Sr. purchased the Salt Lake Tribune from Digital First in 2016, he told the staff that the family was prepared to devote money and work for “five, ten, fifteen years bringing back the great Salt Lake Tribune of yesterday." 29 However, after his death in February 2018, his son, Tribune publisher Paul Huntsman, laid off more than one-third of the newsroom’s 90 employees. The Huntsman family had put more than $1 million into developing a new web production system and upgrading the Tribune’s digital offerings, but in the two years since acquiring The Tribune, ad revenue had fallen by 40 percent and weekday circulation had dropped from 85,000 to under 31,000. In announcing the layoffs, Paul Huntsman said he had personally covered the “losses” at the paper for eight months, but concluded that without significant cost reductions, the financial picture of the paper was “not sustainable.” 30

In 2016, another group of four local investors purchased The Berkshire Eagle in Massachusetts and three nearby Vermont papers from Digital First. The investors immediately added staff and invested in website improvements and upgrades. “We thought that if we make these papers better than they were and return them to what they used to be, that will attract more readers,” New England Newspapers Inc.’s president and publisher Fredric Rutberg said. “I frankly thought that we would get a lot of lapsed readers, people who got frustrated with what had happened in the previous five to ten years.”  Two years in, print circulation has stabilized, but there has not been a dramatic uptick. The investors say they remain committed to improving the newspapers, but concede they have had to temper their initial optimism, based on the financial realities they are confronting. 31

Across the country, in Denver, a group including roughly a dozen former Post employees are trying another approach. Instead of attempting to buy the Post, they’ve decided to create a digital competitor. 32 Called the Colorado Sun, it uses blockchain technology, which is intended to add transparency to the gathering and reporting of news.  They have partnered with Civil Media Company, a New York start-up that aspires to establish 1,000 local digital publications by the end of 2018. 33

Yet, for all the heated rhetoric, picketing and news stories in the spring of 2018, it is business as usual at most Digital First newspapers.  As one commentator put it, why would Alden Capital want to sell its papers when Digital First is achieving 17 percent margins? 34 This leaves community activists, journalists and potential investors still pondering the best way to  revitalize the journalistic mission of the papers owned by Digital First. Should residents in the cities where the Digital First papers are located lobby Alden for change?  Should they seek financing to purchase the paper?  Or should they instead finance the start-up of a new print or digital publication to fill the void?