Publisher Jane Rawlings’ remarks to reporters and editors at the 150-year-old Pueblo Chieftain in May 2018 were intended to be reassuring.  “I think you will be comforted in what they have to say,” she said, referring to GateHouse Media, the new owners of Colorado’s oldest continuously published newspaper. 1 Yet, immediately after the announcement of the sale, Rawlings stepped down as publisher of the 33,000 circulation 2 daily and assumed leadership of her family’s nonprofit community organization. Within a month, GateHouse executives had announced layoffs of the digital editor and two page designers. The staff braced for more changes as the new owner announced a hiring freeze and indicated the company would continue to reassess staffing. 3

The announcement that a newspaper is being sold to GateHouse – the largest newspaper chain in the country — has become commonplace in recent years. Since 2013, the company has spent more than $1 billion on acquisitions, snapping up dozens of papers in 15 states at greatly reduced valuations. 4 Once the company assumes ownership of a newspaper such as the Pueblo Chieftain, it tends to pursue the same cost reduction strategy. It consolidates functions such as copy editing and page design in a remote location. Additionally, specialty and veteran reporters are laid off or severed, and then replaced by general assignment reporters whose journalistic responsibility is to produce “shareable” stories that attract online readers. As a result, GateHouse-owned newsrooms are often half the size within a matter of months. 5 The experience at the Columbia (Missouri) Daily-Tribune, an independently owned paper that  Gatehouse purchased in 2016, is typical.  Multiple rounds of layoffs have wiped out more than half the newsroom staff of 20, leaving only one full-time state and politics reporter as of February 2018, responsible for covering a community of 120,000 residents. In addition, GateHouse eliminated local columnists and the longtime editorial cartoonist. 6

The current GateHouse chain, headquartered in New York, was built through an acquisition spree that began in the years after the 2008 recession.  In 2014, GateHouse owned 379 newspapers and controlled 3.1 million in circulation. By 2018, the company owned 451 papers and controlled more than 4.3 million in circulation.  In its most recent annual financial statement, Gatehouse said it operates in 565 markets in 38 states, 7 a total that includes more than 120 local websites, advertising supplements and business publications. In the last 18 months, GateHouse has completed or announced 11 separate transactions totaling $290 million, often for entire chains. The company has bought more than 25 daily newspapers since 2016. 8 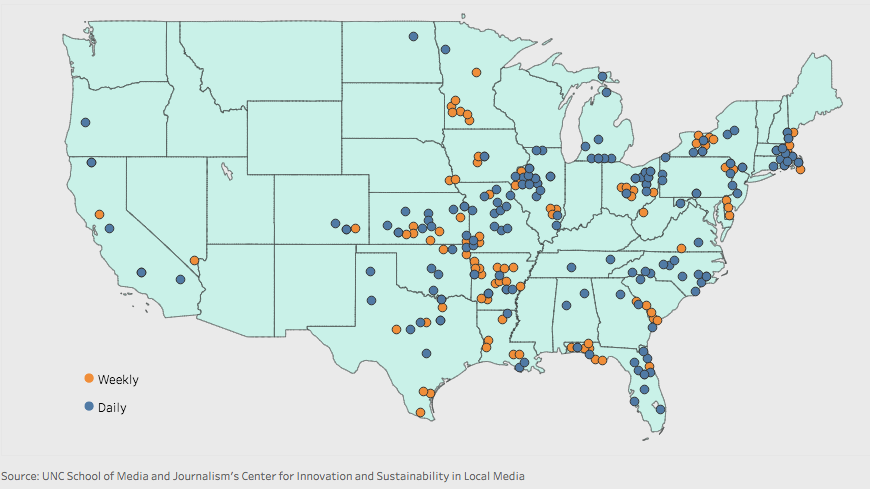 GateHouse is a division of the Fortress Investment Group, which has a diversified portfolio of investments, ranging from financial services to golf courses and private railroads. Revenue from the newspaper chain represents less than two percent of the $70 billion in revenue generated by the Fortress portfolio. GateHouse aggressively manages its portfolio of papers, selling, closing and merging under-performing papers.  Since 2004, GateHouse has sold more than four dozen papers, nearly half of those since 2013. It has also closed five dailies, all with less than 10,000 circulation, in three states – Kansas, Illinois and Missouri. In addition, it has closed or merged dozens of weeklies. Just months after announcing its acquisition of the Austin American Statesman in March 2018, for example, GateHouse said it would close the affiliated Spanish language weekly by October 2018 and offered voluntary severance packages to all of the Statesman’s more than 200 employees. 9

The GateHouse acquisition spree has been fueled by debt.  When GateHouse filed for bankruptcy restructuring in 2013 and reemerged under the name of the public holding company New Media Investment Group, the company listed $1.2 billion in debt. 10 In 2017, its total debt equaled $609 million, roughly 14 times its cash flow. 11New Media Investment Group CEO Mike Reed sees no issue in continuing the scaling and consolidation strategy, as long as newspaper prices remain as they are today, in the three to five times trailing earnings.  With Fortress as its parent company, GateHouse has access to capital that allows it to continue buying.  “(Fortress) allows us to access capital at better rates at better structures than anybody else is able to in our industry,” Reed said in a June 2018 interview with Nieman Lab. 12“In the structure of our credit agreement…for every dollar that we make, a piece goes to the lenders, but we have full discretion to redeploy that dollar. So we can invest in the business, we can do acquisitions, we can pay dividends to shareholders.” In a May 2018 conference call with security analysts, executives at the Japanese telecommunications giant Softbank, which owns Fortress Investment Group, indicated they would support continued expansion of the GateHouse chain, including the major acquisition of another newspaper chain, such as tronc/Tribune, which is seeking investors and entertaining bids. 13

Often, GateHouse targets independent owners who find it increasingly hard to navigate the financial landmines dotting the local news landscape. The company has paid sellers an average of 4.1 times earnings and targets a range of between 3.5 to 4.5 times earnings. 14 “Scale matters, and the more that we have, the better the opportunity becomes for us to execute on our operational strategy,” Reed said.“…I think it’s really hard to do things in onesies and twosies. Our hope is to continue to consolidate the industry, with the focus on the types of deals we’ve been doing in the past, but we can’t do them at all costs.”15

GateHouse has traditionally sought papers in small and mid-sized communities with little media competition. Historically, roughly 40 percent of GateHouse’s newspapers have been in rural or low-income communities, with limited media competitions such as regional broadcasting outlets or other news publications. In 2014, the average circulation of its 359 papers – two thirds of which were weeklies –was less than 9,000. 16 Since 2016, it has shifted its strategy and begun targeting daily papers in larger, metro areas such as Providence, Rhode Island; Columbus, Ohio; Austin, Texas, and Palm Beach, Florida. The Austin American Statesman and Palm Beach Post, which GateHouse acquired in 2018, have a circulation of more than 86,000 and 77,500, respectively. 17GateHouse papers are primarily located in states east of the Rockies – in the central and upper Midwest, South, Mid-Atlantic and New England regions of the country.

However, even as GateHouse continues to boost its revenues year-over-year with acquisitions, the company is experiencing rising costs, dwindling operating margins and declining performance at existing papers. Year-over-year revenues at existing papers fell by nearly 6 percent to $1.3B between 2016 and 2017 while operating income fell by 44 percent to $34.6M. In 2017, GateHouse posted an operating margin of 2.6 percent, down from 8.6 percent in 2015 and 4.8 percent in 2016. While competing newspaper chains have turned to digital to offset traditional revenue declines, GateHouse has been slower to adapt.  Digital revenue totaled $143.4 million in 2017, or only slightly more than 10 percent. 18 At Gannett, the second largest newspaper chain in the country behind GateHouse, 2017 digital revenues totaled $994.9M, or a third of total revenue. 19

GateHouse has sought to combat decreasing operating margins by pivoting to a business-friendly revenue model, offering local businesses everything from mobile app development to small business loans, arranged through one of the financial services companies owned by parent company Fortress. Since 2014, the company has invested $65 million in its business services and financing division, UpCurve, and a marketing division, ThriveHive.20 UpCurve’s revenue has grown from $6 million in 2013 to $71 million in 2017. “We expect (print) declines to continue,” Reed said in the company’s 2017 earnings call. “However, the point here is, we continue to be less exposed to the print category and more exposed to the relevant and stable and growing revenue categories that we've created.” 21

In contrast, there has been little investment in GateHouse newsrooms. 22 Wages have been stagnant, and employees face the continual threat of further layoffs as print revenue declines. Reed acknowledges that GateHouse lays off “highly paid but unproductive reporters” while asking remaining reporters to write more stories. 23 This had led to union drives at several GateHouse papers in Florida, including the Lakeland Ledger and Sarasota Herald-Tribune in 2016 and the Times-Union in Jacksonville in 2018. A mission statement drafted by the union organizing committee of the 45,000-circulation Times-Union said the 2017 purchase by GateHouse has “brought more uncertainty than perhaps any other time in the newspaper’s 154-year history.”24 At the end of 2017, 11 percent of GateHouse’s 10,500 employees were represented by unions. 25 This included employees at such recent purchases as the Providence Journal in Rhode Island and the Erie Times News in Pennsylvania 26 In September 2017, the NewsGuild-CWA negotiated a one percent pay raise for GateHouse employees it represents. 27

As robust coverage of routine government meetings and investigative journalism decline at GateHouse-owned papers, readers are also taking notice. Average daily circulation at existing GateHouse papers fell 15 percent between 2014 and 2018, dropping from nearly 16,000 to under 14,000. 28 Circulation at the Daily-Tribune in Columbia, Missouri, has fallen by more than 20 percent to 13,000 in the two years since Gatehouse purchased the paper and eliminated more than half the newsroom staff. 29 In a column in the Daily-Tribune, the GateHouse-installed managing editor, West Virginia native Charles Westmoreland, acknowledged the impact that multiple rounds of layoffs had on the paper’s coverage of local issues. “We’re still capable of producing impactful journalism, even if there’s a little bit less of it at times,” he said. “I’d love nothing more than to start adding back to the paper, but that will never happen if readers abandon us during this transition.” 30 He pleaded with readers to “please detach yourself from the Tribune of the past and get acquainted with what we are now.”

With print advertising and circulation continuing to decline at GateHouse-owned papers, and digital revenue lagging that of competitors such as McClatchy and Gannett, shareholders are also are beginning to take notice. Stock in New Media/GateHouse sold for as much $25 a share in March 2015. In August 2018, it sold for $16. All of this calls into question how sustainable New Media/GateHouse’s aggressive acquisition and regional roll-up strategy will be long-term, especially as the company pivots away from smaller markets with less competition and focuses, instead, on acquiring dailies in larger, metro areas with numerous media competitors.