It has been a tumultuous decade for tronc/Tribune, full of more plot twists and turns than a good spy novel.  In the first act, which begins in 2007, the Tribune Company is purchased by billionaire real estate magnate Sam Zell. Before exiting, he takes the company private, saddling it with $13 billion in debt. He also brings in a cast of characters who disrupt the staid Midwestern business culture and court controversy with accusations of hostile work environments and mismanagement. The second act involves bankruptcy, a change in ownership, restructuring, relisting of the stock on the New York Stock Exchange, a split of the company’s newspaper and broadcasting divisions and an acquisition spree.  Act three begins with the 2016 takeover by technology entrepreneur Michael Ferro. 1

Ferro starts his tenure as Tribune’s largest shareholder by fending off increasingly generous buyout offers from the publicly traded newspaper chain Gannett. 2To assist with the resistance, Ferro brings in a new shareholder, biotech billionaire Patrick Soon-Shiong. With an ambitious plan to go digital, Ferro then renames the Tribune Publishing Company “tronc”—in all lower-case letters, short for “Tribune online content. 3 Late night comics have a field day with the new name, comparing it to the sound of a duck honking. Soon-Shiong’s and Ferro’s relationship rapidly sours as they feud for control. 4 Soon-Shiong leaves the board in 2017 5 but returns in the closing act to purchase the company’s largest newspaper, The Los Angeles Times, along with several Southern California titles in the spring of 2018. Ferro leaves the company amid sexual misconduct allegations 6 but strikes a deal to sell his shares in tronc to a distant relative of the McCormick family, which had owned The Chicago Tribune for much of its history. But the deal to sell tronc falls through. 7 As the curtain falls, the company is rumored to be weighing offers from potential buyers, 8 including at least one from a private equity group and another from the publicly traded newspaper chain McClatchy. 9

Since the Tribune newspapers were spun off from the broadcasting group in 2014, the division has struggled financially, despite ambitious strategies to transform the company through digital investment and acquisitions. Revenues have declined every year, dropping from $1.71 billion in 2014 to $1.52 billion in 2017. 10 Ferro hoped to move the company toward a new business model that integrated cutting edge technology such as artificial intelligence, which could be used to produce hundreds of videos per day. 11 He split tronc into two divisions, one for print revenue and the other for digital revenue.12 But the company’s digital revenues rose by only 2 percent to approximately $240 million between 2016 and 2017, while its digital expenditures rose. Tronc’s digital revenues now comprise about 16 percent of overall revenues, more than competitor GateHouse but still behind digital leaders such as Gannett and potential purchaser McClatchy. 13

The company has also sought to exact savings from its print properties by acquiring nearby newspapers and merging the newsroom and back-office functions.  But it has faced pushback from the Department of Justice (DOJ). In 2016, the DOJ blocked tronc’s planned purchase of the Orange County Register and Riverside Press-Enterprise on antitrust grounds. According to the department’s complaint, tronc’s Los Angeles Times and the Orange County Register together would account for 98 percent of newspaper sales in Orange County. 14

In 2017, the DOJ also opened an investigation into what eventually became tronc’s failed attempt to buy the Chicago Sun-Times, which Ferro previously owned. 15 The sale would have given tronc ownership of both Chicago dailies. On the other hand, tronc successfully acquired and incorporated the Annapolis Gazette into the Baltimore Sun group of papers in 2014, and in May 2018, purchased the Virginian-Pilot in Norfolk, Virginia, which it will consolidate with the nearby Daily Press in Newport News. 16

As tronc revenues have declined, the company has turned to cost cutting to improve margins. But, despite labor costs falling by more than 15 percent since 2015, its operating margins have remained in the low single digits, ranging from 1.4 percent to 4.4 percent. In 2017, the company identified more than 220 positions that could be eliminated, many of those in its newsrooms. 17 In July 2018, newsroom staffing at the New York Daily News, which tronc acquired in 2017, was cut in half with the layoff of more than 40 employees. This came on top of several rounds of layoffs at the Daily News prior to the sale, which had brought newsroom staffing down from several hundred journalists only a decade ago. 18

The layoffs and cost cutting prompted employees at two of the largest tronc newspapers to take the unprecedented step of voting in unions in 2018.  Employees at the Los Angeles Times, which had a strong anti-union history stretching back more than a hundred years, voted in January 2018 to join the NewsGuild CWA. 19 “Having a union won’t stop layoffs, but we have a collective voice and the days of the newsroom passively standing by while corporate management did whatever they wanted are over,” said Los Angeles Times reporter Bettina Boxall. 20

Despite a concerted campaign by tronc to discourage the union effort, 248 of the 292 journalists at the Times cast votes in favor of joining the guild, spurred by concerns over the paper’s leadership, stagnant wages and workplace misconduct. In April, journalists at the Chicago Tribune announced they were also attempting to unionize, for the first time in the paper’s 171-year history. As the union efforts proceed, tronc is preparing the company for sale. With the purchase of the Los Angeles Times by Soon-Shiong, tronc/Tribune now has 77 papers in its portfolio, including 17 dailies, located in some of the country largest metro markets. It has a total circulation of nearly 2.5 million in eight states. The average circulation of its daily newspapers is 105,000; the average circulation of its weeklies, most of which are located in the suburbs surrounding metro areas, is 13,000. 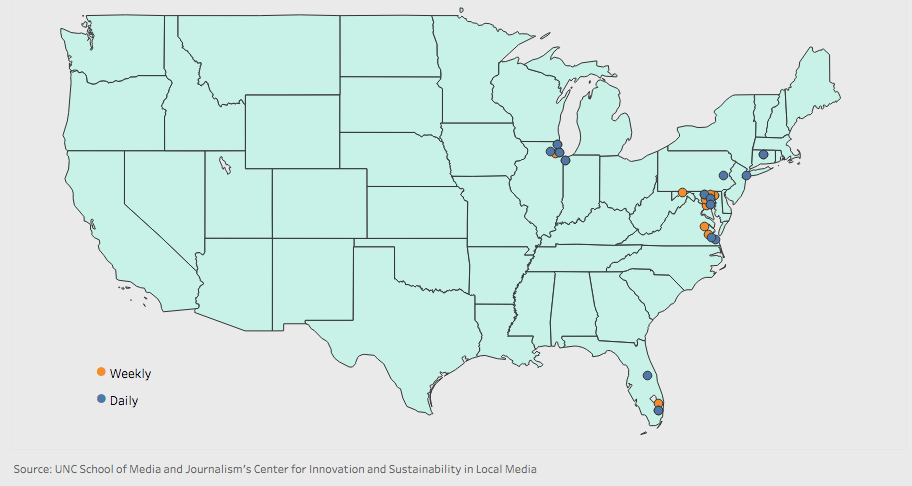 Tronc said it will use the $500 million in proceeds from the sale of the Los Angeles Times, San Diego Union-Tribune and associated weeklies to Soon-Shiong to pay down long-term debt. As of its latest quarter, its long-term debt is nearly $327 million, meaning tronc will have cash reserves remaining after the debt is paid off. 21 When Gannett considered purchasing tronc in 2016 – before the lenders got cold feet and Gannett pulled out – the two companies agreed on a price of $18.75 per share, a 150 percent premium over the $8 price. 22

In August 2018, tronc was trading at nearly $17 per share and had a market valuation of almost $600 million. According to news accounts, initial offers are expected to be in the $700 million range.  Rumored buyers this time include:

Whatever the future may hold for tronc/Tribune properties, the name “tronc” is a historical footnote.  The day Soon-Shiong assumed ownership of the Los Angeles Times, employees hung signs in the building with backslashes through the “tronc” logo.  In his comments to the newsroom staff, Soon-Shiong agreed with the sentiment. “Let’s put tronc in the trunk and we’re done,” he said. 29  On Oct. 4, the board of directors announced the revival of the company’s previous name, Tribune Publishing Company.