Timeline of Newspaper Acquisitions, Sales and Closures by Investment Groups, 2004-2016

Over the past decade, more than a third of all newspapers have changed ownership. The seven largest investment companies have been the most aggressive purchasers and often reshuffle their portfolios to maximize financial performance. As a result, they are continually buying, selling, and closing newspapers. The following timelines explains how each of these seven companies grew. This list, which includes major acquisitions, sales and closures is based both on analysis of the UNC database and on press accounts of the transactions. 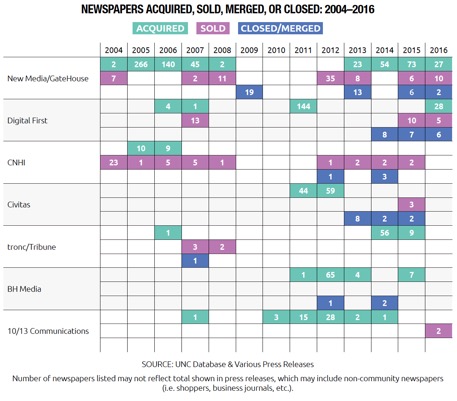 In 2005, Fortress Investment Group (FIG) purchased the Liberty Publishing Group and renamed the company GateHouse. In 2013, the newspaper assets were transferred to a new holding company, New Media Investments. New Media/GateHouse has been the most active investment company in terms of acquiring, selling and closing or merging newspapers.

CNHI was created in 1997 as a holding company for the Retirement Systems of Alabama to purchase newspapers.

In 2007, the Tribune Co., which included radio and television stations, as well newspapers, was purchased for $8.2 billion by investor Sam Zell. Since 2014, when the newspaper division was spun off from the broadcast holdings, Tribune Publishing, recently renamed tronc, has made several purchases, including the Sun-Times’ suburban weeklies.

BH Media was formed as a newspaper subsidiary in 2011 after Berkshire Hathaway purchased the Omaha World-Herald in Warren Buffett’s Nebraska hometown. In 2012, BH Media grew significantly when it bought Media General’s newspapers. Since then, the company has continued to grow through smaller acquisitions.

This private investment firm, formed in 2010, is a partnership between 10K Investments and 13th Street Media. Since its formation, 10/13 Communications has made three major acquisitions: Freedom Communications’ Phoenix assets, the Dallas operations of American Community Newspapers, and ASP Westward’s Houston newspapers. The company also bought the ITZ Group, a digital consulting company, in 2013.