Life in a News Desert: Questions with Nick Mathews 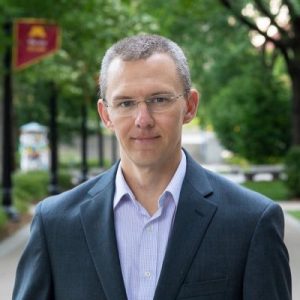 Nick Mathews, PhD student in Media Studies at the Hubbard School of Journalism and Mass Communications at the University of Minnesota.

The number of failed newspapers and the rise of news deserts in the United States is the wide-angle story. But if you zoom in, you discover how the people who live in those news deserts are coping with the situation. Recent research has shown that residents in news deserts are less likely to vote in local elections, and they often pay more in taxes if there is no reporter covering local governmental meetings. They also experience a loss of social connection, and that’s the story veteran newsman Nick Mathews emphasized in this paper. He interviewed 19 residents of Virginia’s Caroline County, north of Richmond, population 31,000, about what happened when their local newspaper, the Caroline Progress, folded in March 2018 after 99 years of publication, leaving the county without a daily or weekly newspaper.

Mathews is a PhD student in Media Studies at the Hubbard School of Journalism and Mass Communications at the University of Minnesota. He previously worked in the newspaper industry for almost 20 years, including time as a senior editor at the Houston Chronicle and as a regional editor-in-chief of a series of daily and weekly newspapers.

What were some of the major research findings in either the academy or industry that preceded your work?

Broadly, the work on news deserts was central to my research. For this piece, I used the theoretical framework of Sense of Community developed by David McMillan and David Chavis. The theory examines elements central to a person’s feeling of belonging to a community: membership, influence, integration and fulfillment of needs, and shared emotional connection. I used the theory to see how it related to citizens and their views on the loss of their local newspaper.

Most important, the newspaper was missed deeply by its former readers. It was the "heart and soul of the community," one person said.

• Without reporters in the county, residents acted as reporters themselves, often with infuriating results. As one person told me, "If you want to be informed, you can be informed. But it takes a whole lot more on your part to be informed. It’s not easy like it used to be. Life is harder in Caroline County without the Caroline Progress."

• Readers missed news, of course, but the single feature most frequently cited in what was missed from the newspaper was the weekly community events calendar. Notifications about a festival, a high school sporting event or a fish fry were sorely missed. The events connected residents to each other and to the community. "That’s what gave a sense of belonging, you knew what was going on and could participate,” one resident told me. “I think there is a loss of the quality of life, with people not being as close because you don’t have the paper."

Even though this was a case study on a small, rural Virginia county, I worry this is just an example of hundreds of other news deserts across the country and around the world as economics and the coronavirus pandemic continue to deliver fatal blows to newspaper organizations. That's my greatest fear.