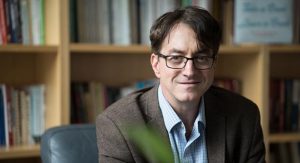 Victor Pickard, professor of media policy and political economy at the University of Pennsylvania’s Annenberg School for Communication

The collapse of the business model supporting both local newspapers and digital start-up endeavors has left many U.S. communities with a dearth of critically important news and information. Because an informed citizenry is crucial for democracy to thrive, the situation raises the question: Can we have democracy without journalism? In his latest book, Democracy Without Journalism? Victor Pickard examines the current American journalism scene, focusing on why the business collapsed and what can be done to revive and support local journalism.

Pickard is a professor of media policy and political economy at the University of Pennsylvania’s Annenberg School for Communication, where he co-directs the Media, Inequality & Change (MIC) Center. Besides Democracy without Journalism? he has written or edited five other books, including America’s Battle for Media Democracy; Will the Last Reporter Please Turn Out the Lights (with Robert McChesney), and After Net Neutrality (with David Berman).

I’ve been interested in the history and future of journalism since my graduate school days at the University of Illinois. I also was immersed in future-of-news debates while working on policy reform in Washington, D.C., before taking an academic job. In the spring of 2009, I was the lead author on a report published by Free Press titled Saving the News. Even then, it was clear that the advertising revenue model for journalism was irreparably broken and we needed to find structural alternatives. Unfortunately, the U.S. has wasted more than a decade searching for new business models and technological fixes instead of focusing on systemic solutions to news media’s market failures. Thus far, meaningful public policy responses to the journalism crisis have been almost nonexistent.

What were some of the major research findings in the academy or industry that informed your work?

A number of research trends guided me in my recent work and support conclusions that I draw from my historical research. Growing evidence shows that losing local journalism is highly deleterious for democratic society, that strong public media systems correlate positively with strong democracies, and that none of the previously celebrated solutions -- from paywalls to crypto-currencies -- are supporting the level of local journalism that democracy requires. Included among this recent research has been Penny Muse Abernathy’s invaluable work on the rise of news deserts and the growing threat of monopolies and vulture capitalists to the future of local journalism.

My historical research shows that commercial journalism has always been prone to crisis and fraught with core tensions and contradictions. Platform companies, newspaper monopolies, hedge funds, and now the coronavirus pandemic have all exacerbated these structural problems, but they are not the root cause. The fundamental flaw, in my view, is the overreliance on advertising revenue and the underlying commercial logic that has far too often superseded democratic concerns and public needs.

I also learned from my research that many historical and international experiments have tried to address these structural problems, including various kinds of media subsidies, municipal-owned newspapers, and other noncommercial initiatives. These experiments can help broaden our imagination for what’s possible now.

Several key implications emerge. The systemic market failure that’s afflicting our news industries necessitates policy interventions and public alternatives. This doesn’t mean that commercial outlets cannot exist -- even flourish in some cases -- but it does mean that for all communities across the U.S. to have equal access to reliable news and information, a public media system is paramount. Neither the market nor private philanthropy will provide this kind of universal service. However, I’m also clear in my analysis that by “public” I actually mean publicly owned and controlled -- not just in name only. This means that future newsrooms should look like the people they serve and be democratically governed by local communities and by the journalists themselves. In my final analysis, I see the current crisis as an opportunity to entirely reinvent our news media system from the bottom up -- to re-imagine what journalism could and should be.

This interview conducted by Bill Arthur.