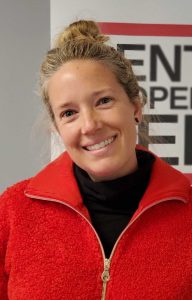 Sarah Stonbely, research director at the Center for Cooperative Media

Why do some communities have an abundance of local news coverage, and others don’t? In a forthcoming paper, What Makes for Robust Local News Provision?, Sarah Stonbely, research director at the Center for Cooperative Media in Montclair, N.J., identifies community characteristics that foster local news coverage. Studying hundreds of cities and towns in New Jersey, she found that median household income, population density, municipal spending, and percentage of the population that is Hispanic were statistically significant indicators of the amount of news coverage residents in a community received.

“The findings of this study suggest that the audience-revenue model may not work in low-income communities, and that overreliance on it may foster inequities, as residents who lack disposable income will not be able sustain a news organization. The findings further suggest the need to seriously consider other models to fund local news,” Stonbely says.

I became interested in news ecosystems, news deserts, and the structural correlates of news provision in 2011 during a summer fellowship at New America Foundation in the Media Policy Initiative, where I worked with Tom Glaisyer and others on several projects related to defining and understanding local news ecosystems. In 2015, I worked with Phil Napoli on the News Measures Research Project, and it became clear to me that understanding news provision in the holistic way afforded by the ecosystem approach would be key to creating knowledge that could help solve some of the urgent problems journalism faces. The work of Penny Abernathy and her team at the University of North Carolina showing the breadth of the news deserts problem only reinforced this.

My analysis of the structural characteristics of local news provision in New Jersey is, to my knowledge, the largest comparative study of its kind. The variables I looked at were median household income, average educational attainment, population density, municipal spending, and demographic makeup. I looked at the relationship between these and the number of local news outlets serving a community for 565 municipalities.

At this scale I was able to conduct meaningful comparative analyses, and found that median household income, population density (characterized as rural, urban, suburban), amount of municipal spending, and percentage of the population that is Hispanic were all statistically significant indicators of the amount of local news coverage. Educational attainment and percentage of the population that is African American were found not to be strongly related to level of coverage.

In addition to the statistical analysis, we mapped every local news outlet serving New Jersey according to coverage area, as well as the structural variables – and this map can be found at http://www.newsecosystems.org/njmap.

Two findings are the most urgent: the importance of median household income, and municipal spending. The fact that local news provision is positively correlated to median household income has huge implications for the business model of local journalism going forward. Many organizations are successfully cracking the code to audience revenue: NYU’s Membership Puzzle, American Press Institute, and News Revenue Hub, to name just a few. Many local outlets that may have otherwise had to close are now being sustained by audiences who genuinely care and value — and, crucially, are able to pay for — their content. The audience-revenue model has become one of the most hopeful and celebrated ways for local journalism to find sustainability.

However, the findings of this study suggest that the audience-revenue model may not work in low-income communities and that overreliance on it may foster inequities, as residents who lack disposable income will not be able sustain a news organization. The findings further suggest the need to seriously consider other models to fund local news, such as giving individuals cash or tax credits toward news outlet subscriptions, payroll tax relief for journalists’ salaries, and subsidies for small business advertising -- all of which are currently being considered by Congress as part of the Local Journalism Sustainability Act, HR 7640. In addition, more philanthropic money could go toward operational costs for news outlets rather than toward projects, as much of it is now.

Second, municipal spending. “Democracy dies in darkness,” as The Washington Post says, and public spending of taxpayers’ money is one of the most important areas in which journalism shines a light. In total, New Jersey municipalities spent $15.1 billion in 2016, the year in which the budget data was gathered. Yet, almost half — $7.4 billion — was spent in municipalities that are covered by zero to two local news originators per capita. This is because seven of the eight communities with the highest municipal spending and the lowest number of local news originators covering them are the largest cities in New Jersey: Newark, Jersey City, Trenton, Paterson, Elizabeth, Atlantic City, and Camden. Note that the Local News Originator measure used here (see methodology, below) does not mean there is zero coverage, it means that the level of coverage is far less than in suburban areas, per capita. Better coverage of urban municipal spending is where journalism-support organizations and philanthropies could directly target money.

What Was Your Methodology?

While sound method is obviously always crucial to a good research project, in this case the method used held even more significance because of its implications for the results. One of the major innovations here, compared to other local news ecosystem mapping projects, is that local news providers are identified not by where their headquarters or newsrooms are based, but rather by the municipalities they say they cover.

To create the dataset of local news providers serving New Jersey, 13 different lists were used, including Cision, Editor & Publisher, and BIA/Kelsey. (Because of New Jersey’s position between New York City and Philadelphia, the lists for those two states were also used). A total of 779 outlets providing local news to New Jersey – defined as multi-sourced, multi-perspective, fact-checked content produced for a public audience – were identified.

Of the 779 total outlets, 683 (88 percent) are physically based in New Jersey, 42 (5 percent) are based in Pennsylvania, primarily Philadelphia, and 35 (5 percent) are based in New York, primarily New York City. This variable shows one way in which this method is different from mapping projects that use the location of an outlet’s studios or headquarters as a proxy for the audience it serves: there are nearly 100 local news outlets serving some part of New Jersey that are based across state lines. Of the 779, roughly 40 percent were newspapers and 35 percent were predominantly online, text-based outlets. For the analyses described above, I focused on those outlets most likely to produce, by their own journalists (original), news about the community it serves (local), on a topic that addresses one of eight critical information needs including stories about local education, local government, and local cultural affairs (This standard for analyzing content – of looking at localism, originality, and coverage of a critical information need – was developed by Phil Napoli). These “local news originators,” as I call them, produce the stories which will, in turn, circulate through a news ecosystem with the help of amplifiers including most television and radio stations and social media.

Further, for the analyses, rather than using the raw counts of local news originators per municipality, I weight them per 10,000 capita, to account for the difference in size of municipalities --- standard practice when conducting large comparative analyses of different structural features of communities.

I discuss the methodology at greater length, with citations, in the forthcoming paper.

This interview conducted by Bill Arthur.