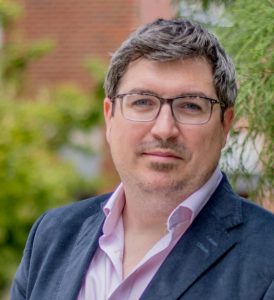 Change is constant and often frenetic, especially when considering the local news landscape in the U.S. and abroad. As professor of the practice at the University of Oregon, Damian Radcliffe is a 2018-19 Faculty Fellow at the Agora Journalism Center at the School of Journalism and Communication, which serves as a “gathering place” – bringing together journalists and others in the Pacific Northwest to discuss how healthy journalism and healthy democracy are inextricably linked.

Radcliffe’s recent research has included tracking and analyzing how work habits and the attitudes of local journalists change over time in response to innovation. He also interested in how business models for local media have evolved in recent years. An active journalist, digital consultant and analyst, Radcliffe is also a fellow at the Tow Center for Digital Journalism at Columbia University. He values long-term, comparative studies (such as the annual Digital News Report, state of media findings from Pew and research produced by his former employer the UK communications regulator, Ofcom), and is the co-author of a 2017 study of U.S. local newspapers.

Radcliffe recently convened a gathering of journalists and academics from the region at the Agora Center to update and revisit a 2016-17 study on local journalism in the Pacific Northwest. “If a week is a long time in politics . . . then four years is potentially a lifetime in the media business,” he said. Several themes emerged from the Agora gathering: maximizing limited resources, providing news and information to under-served communities, building trust and credibility, and doing things differently. He recently authored the first of three reports on that gathering.

“If a week is a long time in politics . . . then four years is potentially a lifetime in the media business.”  Damien Radcliffe

Click here to read Shifting Practices for a Stronger Tomorrow.

I moved to the Pacific Northwest (from across the pond) in September 2015. As a newcomer, I wanted to get the lie of the land in my new home, and a key part of that involved understanding the local media landscape. I have been writing about local journalism for some time, including authoring the first comprehensive report about the UK’s hyperlocal industry. Also, many of our students at the University of Oregon work for local news outlets when they graduate. So, understanding the local landscape matters, as these insights can be used to inform the teaching and advising that we do.

Alongside, at a national level, I was especially keen to learn about the experience of local journalists working at the coalface, as I felt that this was a perspective I seldom saw on a national scale in most journalism research. A much more common approach is in-depth interview and qualitative research with industry leaders. (Although I’ve done that too!)

To remedy this, in partnership with Dr. Christopher Ali at the University of Virginia, we designed an online survey allowing journalists to anonymously share their experiences, and from this we were able to find out how workloads were changing, what emerging media local journalists were interested in learning about, and their attitudes towards topics like engaged journalism. Anonymity resulted in very honest responses and hearing directly from journalists – and not their bosses – meant that respondents were free to break from the party line. Given how quickly the media landscape continues to evolve, I am currently revisiting previous projects to see what’s changed and what hasn’t. I think there’s a huge value in longitudinal, comparative research, even though the temptation (for researchers and journalists alike) is always to move on to something different.

Why did you decide to revisit the topic of shifting journalistic practices?

My background encompasses radio, TV, online and print, and all sectors – commercial, public and community media, as well as two media and telecoms regulators and now working for a University. Local journalism, and the wider potential and impact of new digital tools and technologies on journalistic practice, are clear threads that run through almost everything that I have done. I also have a long-standing interest in the business of media. Where possible, I try to combine these elements into practical, actionable, insights that can be used by industry.

As we know, the pace of change – in terms of the tools we use as journalists, the way media is consumed, the business models which underpin it – is relentless. Because of this, I wanted to see what had changed in the Pacific Northwest since our study in 2016-17; and I’m also looking into that nationally. However, I also wanted to find a more time-efficient way to gather intelligence than a series of in-depth interviews. And I also wanted to avoid publishing one big long report. There’s a risk that great ideas will be lost, and buried, if you take that approach.

With that in mind, I organized a roundtable in Portland (OR) last March, attended by 28 news outlets in the region. We split people up into three groups looking at business and revenue models, changing journalistic practice, and engagement. Each conversation was moderate by faculty from the J-School at the University of Oregon. The report on shifting journalistic practices is the first to be published. Lessons from the other two sessions will come out later this year. There were so many great ideas shared during the day we hosted; I’m determined that these examples are (shared widely) beyond the people that were in the room.

What did you learn, and how had this changed from 2017?

In 2017 much of the conversation focused on emerging storytelling formats and the philosophy of journalism (objectivity, distance, solutions journalism etc.). This time around, the focus was much more practical. We discussed issues of diversity in newsrooms, reaching non-English language audiences, the increasing importance of partnerships and the value of ceding control to your audience – getting them to suggest the stories we should be covering.

We also talked about local journalism’s secret sauce: its proximity to its audience, that local journalists live in the communities they’re reporting on, the value of longitudinal reporting, and the ability to reflect a community back to itself in a way that national media cannot. There’s a strong sense – and I think that’s even greater now - of us all being in this together.

What will you focus on next?

I have four main research projects on the go right now. I’ve just published my latest annual report on the state of Social Media in the Middle East. I’ve been producing these since 2012, the year after the Arab Spring, highlighting key changes in social media usage, and other developments such as the use of social networks as platforms for freedom of expression. This report – my eighth - was co-authored with Hadil Abuhmaid. I’m in promotion – and distribution - mode for this research now!

In terms of media business models, at the end of October, I published a study - The Publisher’s Guide to eCommerce – which offered ten strategic lessons for media companies looking to move into this space. I am currently working on a follow-up, which will be published in March, which will feature deeper-dives into specific players (such as BuzzFeed, POPSUGAR and Marie Claire UK) and the factors (like the power of platforms and the emergence of shoppable content) which will shape this domain.

In the local space, I’m working with two University students on a report looking at revenue and business in the Pacific Northwest. As with the report on Changing Journalistic Practice, the paper will focus on transferable lessons from this conversation.

Lastly, I am also working with a PhD student at the University of Texas at Austin, Ryan Wallace on a new report for the Tow Center for Digital Journalism at Columbia University. This will be an update of the local journalism survey from 2016/17. I’m keen to understand the issues being faced on the shop floor in local newsrooms in 2020. and to see how this differs – or not, as the case may be – from our original survey four years ago. If a week is a long time in politics, to use a very British idiom, then four years is potentially a lifetime in the media business.